Payne of Awareness is the fourth book in the Ferox Payne Series. The series tells the story of Jennifer Payne, an Empath, as she learns more about what she is and about the Ferox World around her.

Jennifer Payne started her Senior year of high school as a part-time student and full-time member of the Omnibellum government. She considered it her job to keep an eye on all of the Ferox around her.

There’s a plot to start the largest war in the history of the world, and Jen will do anything to prevent it. That plot hinges on the power stone. And Jen is connected with the current owner of the stone. Jen is watching a powerful Tracker who is after the stone. Since Jen knows that the end goal of getting the power stone is to open a portal, Jen decides to look for any stone she can find. She thinks she knows where the portal closing stone is and will have to work hard to get it.

Jen still hasn’t gotten over her attraction to Paul, her boss, partly because she knows that he’s attracted to her, too. Paul’s ex-girlfriend is angry at his interest in Jen, and is planning to destroy Paul. On top of that, Jen is worried about her mom’s failing health.

This book is nearly complete. For more details about the status of the book series, see the author website at stephenieyoung.com. 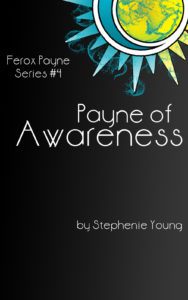 A sample is not yet available for Payne of Awareness.